This race has officially become one of my new favorites. Having never raced at Winston Salem before and after hearing all the hype about this race, I was especially looking forward to this one. I was also super excited to be reunited with my Twenty20 teammates!

We arrived a few days early so we could take some time to settle in and explore the area, and everyday we would ride on the greenway bike path by our host house. We really couldn’t have stayed in a better location. I’ll have to remind myself to bring my mountain bike here in the future as there is a sizable trail system that runs right along the greenway. I’m not going to lie, I was a bit tempted to go off-road exploring, but knew that it was probably safer to stick to the road with a big race coming up. 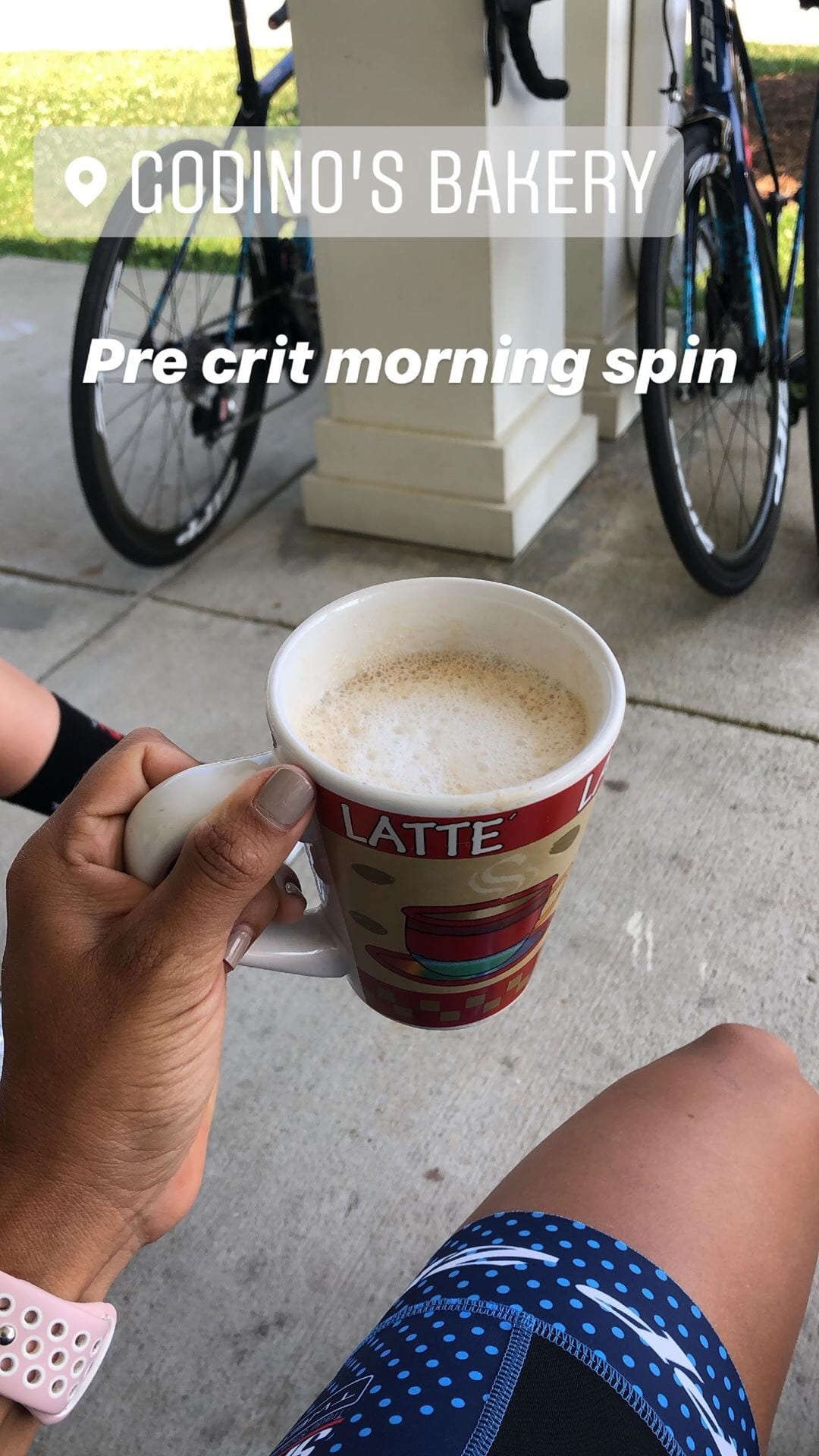 Friday was criterium day. Since we didn’t race until 5 pm, we decided to go for an easy morning coffee spin with our host, John. I personally love easy morning spins to loosen up the legs before an afternoon race, plus it mentally helps me with taking the edge off of the pre-race nerves. However, if I don’t spin, my legs tend to feel asleep from sitting around all day. In all honesty, who doesn’t love coffee rides?

The crit course was punchy and technical, with six turns and a couple short, punchy climbs. My favorite type of course! I had overheard some people chatting before the race about how this crit is the hardest on the calendar due to how fast and technical it is…and if you ask me, they aren’t wrong. The race was fast from the gun (as crits typically are since they are usually only one hour or less). We had all started with ice socks in our jerseys because of the 90 degree weather, but mine was completely melted by the end of the first lap. I found myself struggling to get towards the front early on, and unfortunately so did some of my other teammates. Thankfully my teammate Jen stayed up front patrolling things and keeping Chloe (my other teammate) safe for the first part of the race. About mid way through, I finally found a good rhythm and got myself to the front so I could play my part in shutting down attacks. Strangely, the legs felt better as the race went on, and I did my best in making sure things stayed together in hopes that it would come down to a sprint finish for Chloe. On the last lap, Chloe attacked over the top of climb, and held her lead all the way to the finish! Unfortunately, I got slowed up by a crash on one of the corners of the last lap, and ended up finishing mid-pack. However, the fact that Chloe won made it all okay! 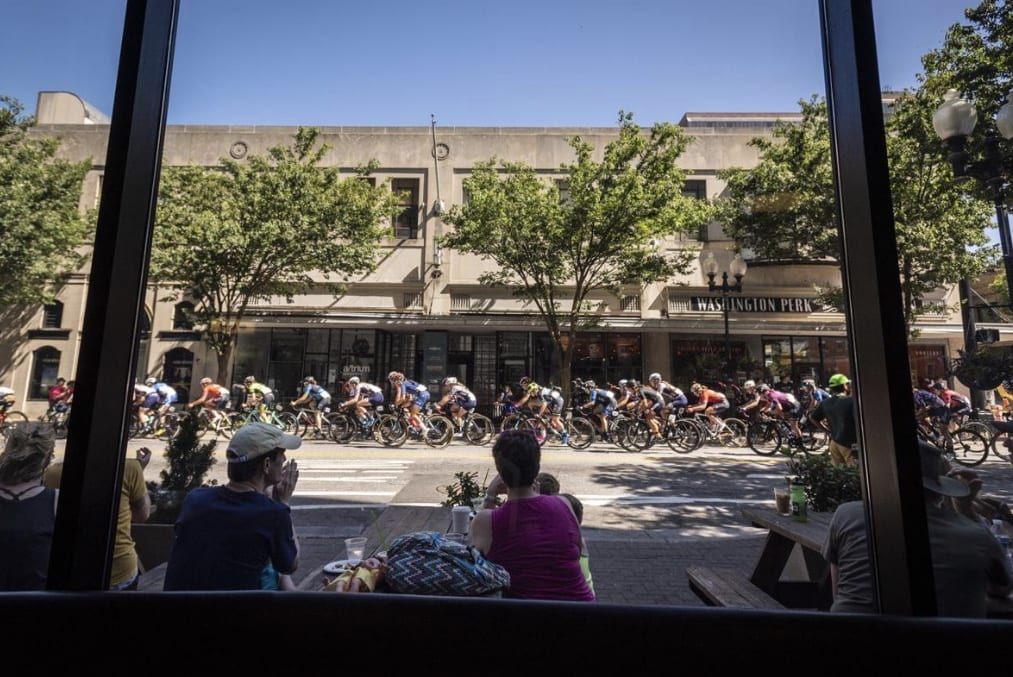 After a rest day following the crit, it was time for the road race. The race consisted of eight 7.5 mile laps for a total of 60 miles. It was also a punchy and technical course with both sharp and swoopy turns, punchy climbs, and one longer, steeper climb. Going into the race, we knew we’d be happy if the race came down to a sprint for Chloe. Our team director also suggested that if I saw an opportunity to break away with an attack in the second half of the race, I could go for it.

The race started off fairly mellow. There were some small attacks, but nothing significant. It wasn’t until the second half of the race that there were some more significant attacks where breaks formed, but didn’t stay away very long. On almost every lap, I found myself moving up to the front while going up the steep climb towards the finish. No denying my legs felt nice and punchy. Our team did well with shutting down and throwing down attacks in the first half of the race. Then in the second half, I made sure to be near the front to shut things down or to make a move in case there was an opportunity for a break. On the second to last lap, I went with an attack up the steep climb along with several others including Chloe. My legs were screaming at me by the time I was almost to the top and subsequently couldn’t quite hold the pace of the breakaway group up and over the climb. I found myself riding alone on the long downhill 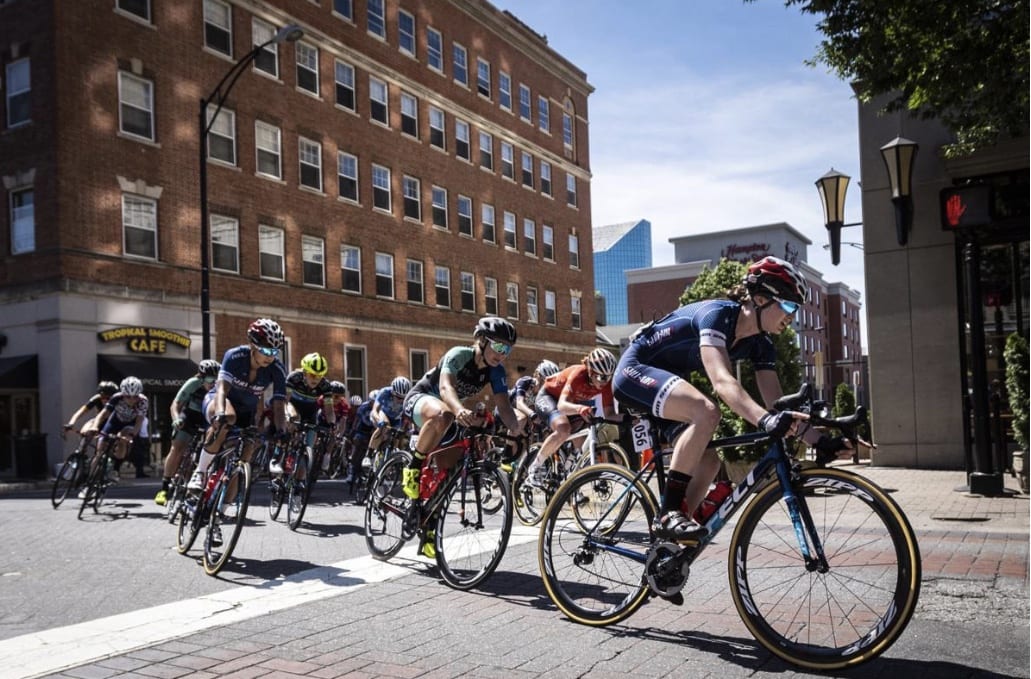 straightaway following the climb, somewhere in between the breakaway and the peloton. Thankfully, another rider bridged up to me, and we worked together to bridge up to the break. By the time we caught up to them, I was pretty gassed. Once I recovered enough, I then went to the front and pulled the group for a good portion of the lap with Chloe on my wheel. Unfortunately I hadn’t seen one of the Hagens Berman girls attack the break and get away (this happened just before I had caught up with the break). Had I seen this, I would have attacked to try and shut down the gap, and then Chloe could have made a counter. However, that’s bike racing. Even as a pro, I’m always learning! The rest of the lap was pure agony with cramps in both of my calves while I continued pulling the group as much and as hard as possible. When we came near the final climb, I gave it everything I had at the front so that Chloe could have a fast lead-out going into it. She and the rest of the group blew by me and I rolled up the climb and down towards the finish using what little energy I had left. In the end, Chloe was 3rd, just a few seconds off of first, and I was 10th. Overall it was a solid day, even if it wasn’t perfect! I definitely learned a lot and am already looking forward to racing here again next year.